There’s no sugarcoating it, the past seven days have been very tough throughout the entire cryptocurrency market, with a few small exceptions. The total capitalization dropped to $2,375 billion, which represents a loss of about 13%. Let’s start with Bitcoin.

The primary cryptocurrency is down 14% on a seven-day scale. It started the week at around $56K, but bears weren’t having it anymore and crashed the price during the early Saturday trading session when BTC dropped to $42K. The entire market was painted in red, and we even saw a BTC flash crash to $28.8K on Huobi. The ordeal left its mark in the face of over $2.5 billion in liquidated positions.

From then on, it’s been mostly a choppy sideways action from bitcoin, which has been unable to reclaim the $50K mark decisively, despite the attempts from Tuesday to Thursday. The rest of the market is also bleeding out. At the time of this writing, ETH is down 10%, BNB – 6.9%, Solana – 24.2%, Cardano -25%, Polkadot -25.5%, Avalanche -20%, and so forth. The only two major cryptocurrencies that aren’t down are Luna with a 2% gain and Polygon, which is up 1%.

Of course, zooming out presents a picture that’s not so gloomy as BTC is currently about 30% below its all-time high. Providing the community with a bit of hope was famed analyst and creator of the stock-to-flow (S2F) model, PlanB, who outlined that we’re not yet in a bear market and that $69K wasn’t this cycle’s top.

And while the above surely sounds good on paper, the Bitcoin fear and greed index remains in a state of “extreme fear,” showing that investors do not necessarily agree with PlanB. Of course, this might also be construed as a buying opportunity for those who want to scale down on their investments.

In any case, it’s as exciting as ever to see where the market will head next, especially after the US Bureau of Labor Statistics revealed the country’s inflation numbers for November, and things don’t look pretty. At 6.8%, the Consumer Price Index is currently at a 40-year high. 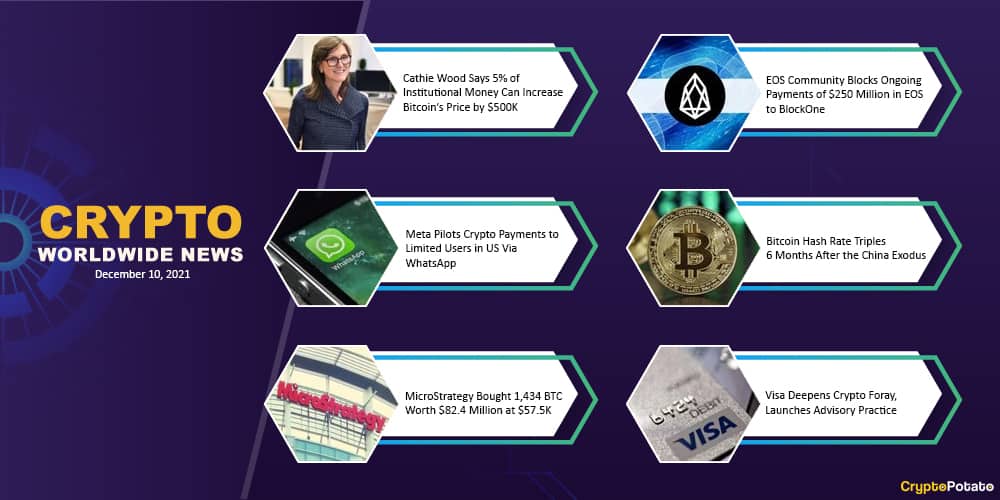 Cathie Wood Says 5% of Institutional Money Can Increase Bitcoin’s Price by $500K. Cathie Wood, the CEO of Ark Investment, believes that only 5% of institutional money can catapult Bitcoin’s price with another $500,000. She also asserted that crypto is a new asset class with a different correlation compared to others.

EOS Community Blocks Ongoing Payments of $250 Million in EOS to BlockOne. The community behind EOS has voted to halt ongoing payments worth around $250 million to the company that was originally behind the project – BlockOne. This comes after prolonged debates within the community on the matter of BlockOne’s overall reliability.

Meta Pilots Crypto Payments to Limited Users in US Via WhatsApp. Meta – the company formerly known as Facebook – has decided to pilot cryptocurrency payments to a limited number of US-based users through WhatsApp. The initiative will take advantage of their Novi wallet.

Bitcoin Hash Rate Triples 6 Months After the China Exodus. The hashrate of Bitcoin’s network has increased by almost three times in the months following the Chinese miners’ exodus. This demonstrates the robustness of the BTC blockchain and its ability to recover following damaging events of this kind.

MicroStrategy Bought 1,434 BTC Worth $82.4 Million at $57.5K. MicroStrategy – the tech giant spearheaded by the Bitcoin permabull Michael Saylor – has revealed another whopping BTC buy worth upwards of $80 million. The company bought 1,434 bitcoins at an average price of around $57.5K.

Visa Deepens Crypto Foray, Launches Advisory Practice. Visa, the leading payments processing company in the whole world, has increased its cryptocurrency focus. They revealed that the company is launching a crypto advisory practice to help clients get into the industry and already has a client in the face of the American bank UMB.

This week we have a chart analysis of Ethereum, Ripple, Polkadot, Luna, and Avalanche – click here for the full price analysis.